Middle Eastern food is hard to sum up. It comprises of many different countries from Afghanistan to Turkey to Egypt. The history of all these countries is a rich tapestry. Food history is part of it. The fertile crescent gave way to agriculture and the first cultivation of crops by humans. Many plants and grains originated in the Middle East. The food that comes from this area is infused with many spices and some herbs as well. The spices came from the east- China, India, Sri Lanka, Indonesia and the herbs came from Italy and Greece. Spices used to be hot commodities and were one of the main premises for trade through the Middle East and on to the rest of the world.

We spent two days cooking Middle Eastern cuisine. Because their food influenced so much of the world’s cuisine (especially in Europe) I will talk about Manti. Manti is a stuffed pasta. But it is simple. The dough is cut into little squares once it is rolled out. Seasoned ground meat is place into the dough and little meat boats are shaped, leaving the meat exposed. This was probably a precursor to the more intricately stuffed pasta we know like ravioli and tortellini. Manti is baked in the oven and then served in hot broth, topped with yogurt garlic sauce, chopped up herbs and Aleppo pepper. 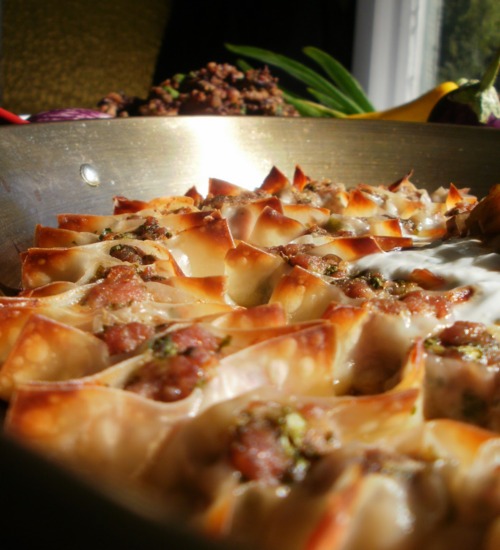 We made so many other dishes I can’t even begin to list them. Most of them were filled with the flavours of coriander, cumin, cinnamon, sumac, pepper and many more.

It's garlic month @carpfarmersmarket !! This is th

Every second week you can find sourdough bread @ot

From Cranberry and seed addition to finished produ

Hello! I've got a helper at the market today! An

Fire glowing in preparation for @carpfarmersmarket

All packed up and ready to go to the @carpfarmersm

Sourdough starter is going strong in this heat! J

Stay in the know! Sign up for Heather’s Hearth Bakery News!